This is my contribution to FsAdvent 2021

We have done the heavy lifting already.

In this post, we’ll write encoders, decoders and fitness functions to solve a TSP instance with BRKGA, and look at the quality of the solution.

We note that the general case we’re solving is for a complete weighted graph. Because the graph is complete, any permutation of node sequences is a Hamiltonian Cycle. Let’s call this permutation a Tour. Note that with TSP problems, the node id’s are 1- based, so we will use the NodeId type for safety.

So given a sequence of NodeIds, we need to find an array of floats that encodes the order of the nodes. We do this by generating a bag of sorted random floats. We then map the tour to a chromosome by picking the float that corresponds to the nodeId from the bag. The resultant chromosome will have arbitrary floats as its genes in the traverse order of the tour.

Computing a tour length uses the adjacency matrix and sums the edges between adjacent cities on the tour, and finally loops back to the start

Using this, we can create a FitnessFunc:

We’ve encountered the driver before, but I’ll put the entire main function here:

Not counting the #include lines, the main program is less than 20 lines of code!

Running this code results in this console output:

Opening the CSV and plotting Fitness vs RunID gives us: 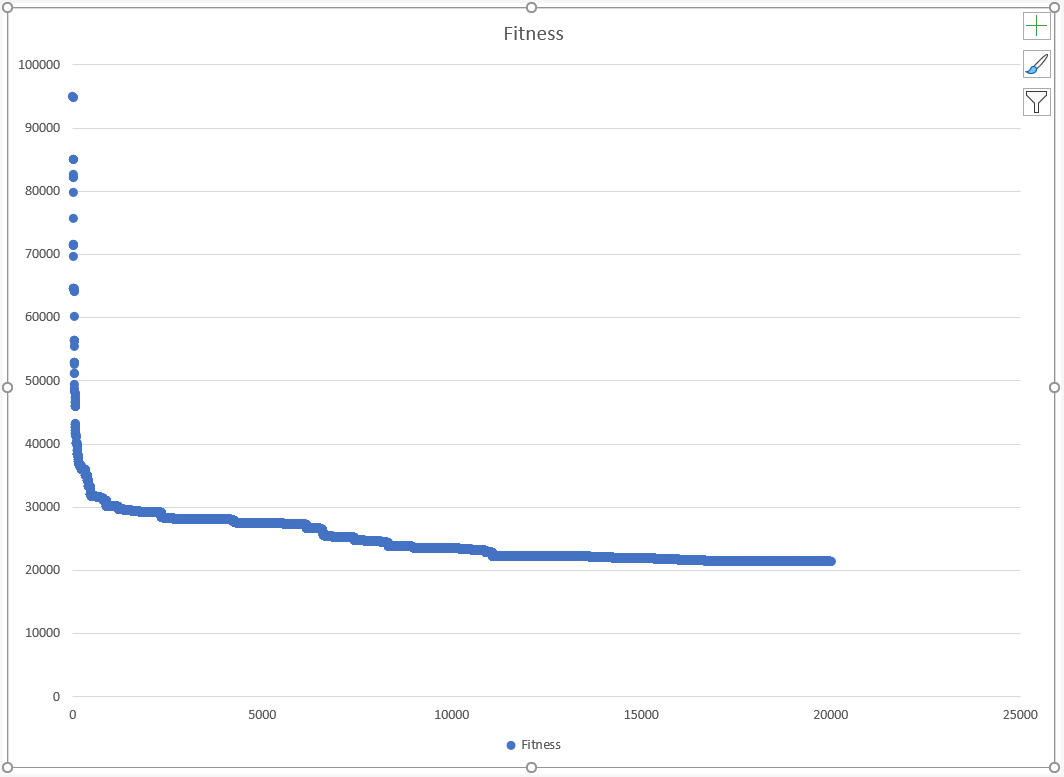 The performance of the BRGKA is impressive - we ran 20,000 iterations in about 5.5s, and saw the tour fitness converge very fast at the beginning, and then plateau off at the end to settle on a path fitness that was only roughly 20% of the path fitness of the starting point.

I’ve seemingly harped on the terse nature of the F# code, but it’s worth pointing out that this terseness has not come at the expense of readability or simplicity of code. That is to say, we haven’t played “code golf” to frivolously try and achieve some terse, unreadable code. I don’t think this feature of F# is rated highly enough!

In the next post, we’ll wrap up this series with a short summary of what we have achieved, and what we can do next!

This “Scientific Computing With F#” Series

This page was generated by GitHub Pages.